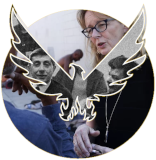 What is the problem here ? Why global change is needed

Many countries have already made or are making the change but in many others, especially the UK and USA and other rickh, industrialised, technologised nations its as if this human rights issue simply does not exist. it does not have the same "sexy" profile as racism or anti-semetism, womens rights and other human rights campaigns. The person who best explains the problem in clear, truthful terms is Franco Basaglia ...

"The microcosm that Basaglia and his colleagues saw in Gorizia was that of the asylum, of the manicomio, as a microsocial architectural space that reproduced perversions in human rela­tionships which were not only countertherapeutic, but iatrogenic, creating an illness specific to itself."

The manicomio, wrote Basaglia in this period, was "an enormous shell filled with bodies that cannot experience themselves and who sit there, , waiting for someone to seize them and make them live as they see fit—that is, as schizophrenics, manic-depressives, hysterics, finally trans­ formed into things."

“Within its four walls, the pulse of history ceases to beat, the social identity of the individual contained therein is suppressed, and the process of total identification of the individ­ual with its psychic dimensions takes place. The conditions of his life maybe offered as proof of his innate inferiority, his culture dis­regarded as the expression of his irrational deviation. The silence which sets in, in the asylum, becomes both typical of it and guar­antees that, from it, no other message will reach the outside world."

QED. Problem defined. The modern "asylum" no longer takes place excusively within physical walls but by using modern drugs combined with ECT that essentially seal those people within their "bodies that cannot experience themselves" as Basaglia puts it. Then Basaglia hits the nail on the head ... "The silence which sets in, in the asylum, becomes both typical of it and guar­antees that, from it, no other message will reach the outside world.". Hence why this is almost an unknown human rights issue on the world stage, in the media and in every day conversation. This is the problem. The solution ? To create life, knowledge and awareness where there was none.

"You never change things by fighting the existing reality. To change something, build a new model that makes the existing model obsolete". As quoted in Beyond Civilization: Humanity's Next Great Adventure (1999), by Daniel Quinn, p. 137

Elon Musk: "I came to the conclusion that my initial premise was wrong, that in fact there is a great deal of will, that there's not such a shortage, but people don't think there's a way, and if people thought there is a way, or at least something that would not break the federal budget, then people would support it [...] it's not a question of will its a question of showing there's a way".

This is the same in the area of replacing abusive psychiatric practices. There's the will but people often don't think there's a way. However in this case we don't have to start up the equivalent of Tesla or SpaceX to prove there is a way. Extraordinarily the hard work has already been done. It's called the Trieste "model" of mental health (although its more like a practice). The data shows better outcomes and less drain on financial resources. The work has been replicated in completely different projects like Loren Moshers Soteria Houses and similar work done by R D Laing that proved that a drug/ECT approach is simply not needed. The work has been verified by follow up studies over decades.

I have a Dream 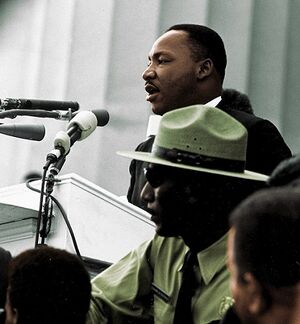 I have a dream that one day this planet will rise up and live out the true meaning of its creed: "We hold these truths to be self-evident, that all men are created equal."

I have a dream that my four little children will one day live in a nation where they will not be judged by distress but by the content of their character.

Possibly inspired, just a little, by MLK's famous "I have a dream" speech). Original ...

I have a dream that one day this nation will rise up and live out the true meaning of its creed: "We hold these truths to be self-evident, that all men are created equal."

I have a dream that my four little children will one day live in a nation where they will not be judged by the color of their skin but by the content of their character.

I have a dream that one day, down in Alabama, with its vicious racists, with its governor having his lips dripping with the words of "interposition" and "nullification" -- one day right there in Alabama little black boys and black girls will be able to join hands with little white boys and white girls as sisters and brothers.

This is not an idle comparison. It was Franco Basaglia who was the one who finally laid out the truth. For example see especially one of his papers as well as a blog post about it here and the full PDF of the paper. This blog post is also relevant. With this new understanding its possible to see through the "cloak" that obscures what coercive psychiatry and their ideas in the society really are. For example take this random quote from an article about Apartheid ...

"Interviews with relatives and former classmates reveal an upbringing in elite, segregated white communities that were littered with anti-Black government propaganda, and detached from the atrocities that white political leaders inflicted on the Black majority." Source: Elon Musk Left a South Africa That Was Rife With Misinformation and White Privilege

This can be rewritten as ... "Interviews with relatives and former classmates reveal an upbringing in elite, segregated communities that were littered with anti-mentally ill government propaganda, and detached from the atrocities that psychiatrists inflicted on the traumatised and distressed." 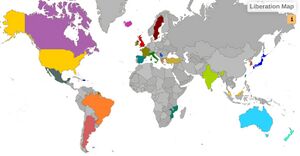 This wiki will hold pages linked from the map at liberation-map.michaelzfreeman.org

This wiki is intended to allow public editing of pages as long as you register an account (there will not be anonymous editing), however this will not be enabled until there are more people who are willing to volunteer as moderators. Please email me at michael@michaelzfreeman.org if you are interested.

Have a great day !

Consult the User's Guide for information on using the wiki software.

The map contains a layer of markers that show the various international groups that are part of MIA Global.

The map contains a layer of markers that show the various international groups and organisations that are part of the International Mental Health Collaborating Network.

The Story of Liberation Map 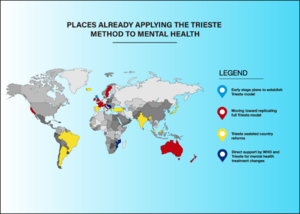 Back in 2019 I started putting together a map based on a world map SVG on Mediakwiki Commons. In the UK I'd noticed the most appalling ignorance and literal information blockade when it comes to this area. It's assumed (although this is changing) that psychiatry's unnatural and frankly bizarre way of treating people in distress is "the only" way of doing things. No one knew about the major discoveries since the 1970's; Soteria Houses, Loren Mosher, R D Laing, John Weir Perry and of course Franco Basaglia. They did not and still don't know, although more are catching on, that there is a literal liberation movement WINNING across the globe (as you can see by clicking on the various countries). This is incredibly positive and such a contrast to the endless deary horror stories from perverted psychiatry that just depress and grind us all down. Those stories are very important and its important that victims are heard. But there's another side to this. Perverted psychiatry is falling across the globe. For example Argentina passed a law in 2010 to prevent the illegal coercion, torture and incarceration of the distressed. Perverted psychiatry are losing, and they are losing BIG, and rightly so. They have destroyed and hurt millions upon millions over the years and their lack of humanity has returned to bite them in the ass ! So, back to the map. The SVG map turned out to be unwieldy and difficult to manage. It's very difficult to add user interactions and popups directly to the SVG. I was then inspired by a map put together by the Joshi Project but was becoming increasingly frustrated with the SVG. I eventually remembered that I'd used QGIS before when I did some Mars mapping. QGIS is a big Geographic Information System application. Much of my excitement about GIS undoubtedly goes back to a very enthusiastic geography teacher that I had at secondary school. He got us involved in mapping third world problems and eventually something "clicked" about what he was teaching us. So QGIS is quite a complex and intimidating piece of software. However eventually I found I could just type "world" into the coordinates box to get a world map, then it was a case of using qgis2web to make the links and popup's into a web page. So there you go. Mapping liberation.

Here is an example QGS project file (not up to date).

Please not the Blockquote is somewhat broken in the Visual Editor as it does not show indented in the editor itself. However when saved it should show indented. This is due to an issue with the Chameleon skin.

Please note that video's can be uploaded and embedded, however the Visual Editor interface is somewhat difficult to use (missing thumbnail and formatting problem) with the current plugin. However the video should appear once the page is saved.

Retrieved from ‘https://liberation-map.michaelzfreeman.org/wiki/index.php?title=Liberation_Map_Wiki&oldid=215’
This page was last modified on 5 July 2022, at 17:24.
Content is available under mixed licenses and rights unless otherwise noted.
Privacy policy
About Liberation Map
Disclaimers